Menu
Facebook-f Instagram Linkedin-in
The service and cleanliness of your company has been exceptional from start to finish and your quick responses have enabled us to move our project forward ahead of schedule. Many Thanks
Mr J WickhamMaidstone, Kent

Plasterite is a fibrous plaster specialist that manufactures decorative mouldings and one-off projects for clients in Kent, London and the South East of England.

There are many benefits to using fibrous plaster for ceilings and enrichments compared to traditional lime plaster or other decoration materials. Fibrous plaster is proven to be strong, long lasting and offers good fire protection. It is also relatively lightweight, but the main attraction is its ability to create and replicate complex forms, the speed of production (off-site), and installation during building construction. Mouldings’ “fibrous nature” allows for more temperature extremes and vibrational elements than solid fixtures – yet none of the aesthetic desires are sacrificed. Fibrous plaster can also be decorated soon after installation, unlike traditional lime plasterwork that needs time to carbonate. 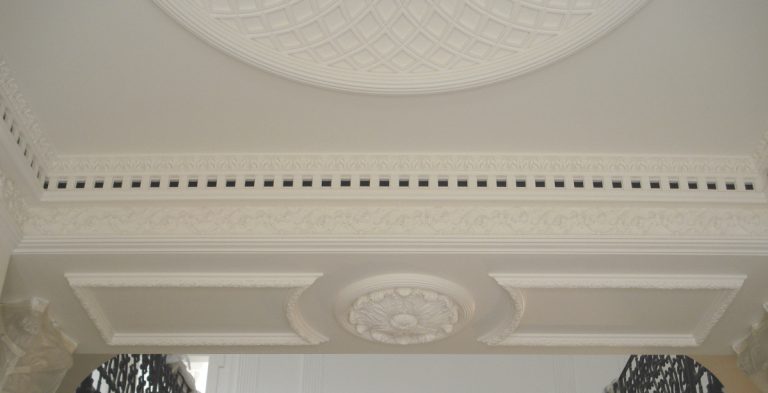 What is fibrous plaster?

Fibrous plaster is a form of decorative plaster that is typically used on interior walls and ceilings in order to create ornamental detail and design features.

What is it made of? Well, Plaster of Paris is the major ingredient, which is a quick-setting gypsum plaster consisting of a fine white powder (calcium sulphate hemihydrate), which hardens when moistened and allowed to dry. The fibre in ‘fibrous’ is traditionally hessian scrim – woven strands of bark from the Jute plant that, when added to the Plaster of Paris adds strength and prevents snapping and cracking out of the face.

Larger sections of fibrous plasterwork are further supported by timber laths and/or timber framework set within the moulds during the manufacturing process.

Casting of low-relief lime decoration in moulds began in the 16th century. By the end of the 18th century, casting elements in gypsum had become common.

The Frenchman Léonard Alexandre Desachy (1817–1886) patented fibrous plaster in the UK in 1856. Desachy produced the first architectural fibrous plasterwork in the UK for St James’s Hall in Piccadilly, London in 1858.

The boom in theatre and music hall construction from 1880 to 1910 helped to popularise the material over a wide geographical area, but other developments such as public halls, hotels, restaurants and clubs, banks, and various other types of buildings also benefitted.

Use of fibrous plaster continued through into the twentieth century, and by 1921 there were some four thousand cinemas in the UK – the majority of which displayed ornamental ceilings and enrichments. After the Second World War the introduction of lightweight gypsum plasters and plasterboard in new construction contributed to the decline of both traditional lime-based plaster and fibrous work.

However, specialist manufacturers such as Plasterite survive to offer tailored services for clients preferring plasterwork of traditional design and materials for repair, restoration and replacement when circumstances require it.

We produce a range of products with which to decorate your home. These include popular items like ceiling roses, cornice and coving. Take a look at our plaster moulding product brochures to explore the options.

For the ultimate expression of design, we can also create ornamental fibrous plaster ceilings and bespoke mouldings to either match or recreate an existing period pattern or to a custom design of your choice. Our staff can arrange to visit your property to view the rooms and take measurements, before developing working drawings and agreeing a production and installation schedule.

If you are unfortunate enough to have experienced some damage to your property and are in need of ceiling repairs or some detail is missing from mouldings we have the experience to assess the damage and offer expert advice on repair, replacement and match-to-existing décor.

Plasterite is one of the leading fibrous plastering companies in London and the South East. We are an acknowledged specialist in plaster repair and restoration, creators and installers of beautiful mouldings, with a breadth of experience ranging from small private residences to large Grade I listed buildings. We aim to provide true value to our clients by providing the perfect finish to your project utilising knowledge, skill and care.

Please take a look at our Projects page to see examples of our work, or visit the Product brochures page for information about fibrous plaster cornice mouldings and other decorative pieces. Alternatively, if you would like to seek advice or discuss a project in more detail, please contact us.